Getting An Annulment in Singapore: Things To Know 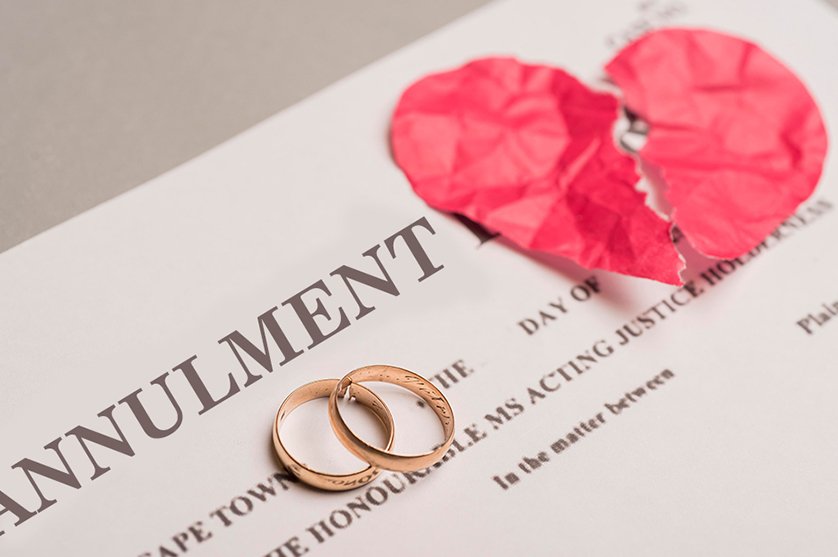 Choosing to end a marriage is a monumental decision, and going through the process of divorce is often a painful time for all parties involved, even if it was amicable. However, divorce is not the only option available and may not even be the most suitable solution for some couples. An option that many overlook is obtaining an annulment of marriage. As such, this article will discuss when annulment is suitable, as well as the process and requirements of obtaining an annulment so that couples can make an informed decision.

What Is An Annulment?

An annulment refers to the legal process in which a marriage is dissolved and considered null. In essence, the marriage will be treated as if it has never existed. This process originated from old English religious laws. As the Church did not recognise divorce, the annulment process was created as a way to dissolve unhappy unions without going against the law.

After an annulment, both parties legally return to ‘single’ status. This is different from a divorce whereby both parties are given the legal status of ‘divorced’. Annulment may thus be appealing to couples who would like to avoid the possible stigma associated with being divorced. Another reason why annulment is a better option for some couples is that they do not have to wait for a minimum period of 3 years from the date of their marriage to apply for one, which is a requirement for divorce in Singapore.

Preparing For An Annulment In Singapore

In general, there are 3 things that couples need to prepare before filing for an annulment in Singapore. They are:

1. Proof that the marriage is void or voidable

Void marriages refer to marriages that are invalid from the very beginning. In such cases, as long as one party has proof that there was some failure in obtaining a valid marriage in Singapore, an annulment can be obtained. Void marriages include those that are:

On the other hand, a voidable marriage refers to a union that may have been valid at the time of the union but due to certain circumstances, it has been rendered invalid. Similarly, one party has to show proof of the marriage being voidable before an annulment can be granted. Voidable marriages refer to those that:

As the Court can refuse to grant an annulment if the evidence is not sufficient, the help of a good divorce lawyer can ensure that there is enough valid and useful proof alluding to a void or voidable marriage.

2. Apply for an annulment within 3 years

This is only applicable for voidable marriages. If a spouse wants to annul a marriage due to special circumstances rendering it invalid, they will have to file for annulment within 3 years. The only exception where proof of voidable marriage is accepted for long marriages is when there is evidence of nonconsumption of the marriage either due to the refusal or incapacity of one party or both parties.

For void marriages, there is typically no time limit.

Similar to the divorce process, the Courts will grant an Interim Judgement before moving to settle on ancillary matters such as division of matrimonial assets, spousal maintenance, child custody and maintenance (if applicable) if the married couples have not reached an agreement on them beforehand. As such, the courts will consider the same factors in splitting the assets for an annulment as for a divorce. Do take note that ancillary proceedings are only applicable for annulments of voidable marriages and not void marriages as void marriages are considered invalid from the beginning.

Married couples are encouraged to try to reach an agreement regarding ancillary matters so that the annulment process can proceed as smoothly and quickly as possible. This includes reaching an agreement on custody, care and control of and access to children (if any), division of matrimonial assets, and spousal/child maintenance.

For couples who own a flat from the Housing Development Board (HDB), it is crucial that they present a matrimonial property plan detailing the proposed arrangements. This is because most annulments are applied within 3 years, which is below HDB’s minimum occupancy period of 5 years. In most cases, the flat is returned to HDB. Nevertheless, if a couple wants to retain the HDB flat after their marriage has been annulled, they can consult a divorce or family lawyer to discuss their options.

Filing For An Annulment in Singapore

Since the annulment process, like most legal procedures, can be complex, a divorce or family lawyer in Singapore should be engaged to prepare the necessary documents. The documents to file to obtain an annulment include:

These documents will be filed with the Family Justice Courts and served on Defendant, who may file a Memorandum of Appearance stating whether or not they intend to contest the annulment.

If the annulment is uncontested, a date for an uncontested court hearing will be set, and both parties must attend. Before issuing an Interim Judgement, the Judge will ask both parties a few questions during the hearing. However, due to the current COVID-19 pandemic, the Judge may grant an Interim Judgement without requiring both parties to appear if no further questions are required. Three months after the issuance of the Interim Judgment, a Judgement of Nullity will be issued, bringing the annulment proceedings to a close and the marriage is then officially annulled.

All in all, an uncontested annulment process will take approximately 4 to 5 months to complete. If, on the other hand, the Defendant contests the annulment, the process will likely be a much longer one. For married couples who wish to end their union, it is good practice to consider the various different options available before deciding to settle on one. Whether they are considering a divorce or annulment, couples will benefit greatly from consulting an experienced divorce lawyer who can provide sound legal advice and help to navigate the complexities of the legal landscape in Singapore.

Lie Chin Chin has a dedicated team of divorce and family lawyers to guide you through the divorce process in Singapore. Contact us today to find out more